Sunday, 23 December was a great day. I had lunch at Dad’s new place in the “Lifestyle” village. (apparently it’s not a retirement village) I noticed he hadn’t connected up his stereo so I helped him do that so there would be music on Xmas Day.

In the evening I went round to a mate’s place to pick him up to go see the lights on Franklin Road. But on the way there I noticed an amazing sunset starting to form, so I had to drive extra fast to get to his place so I could watch it from his balcony (he has an amazing view). The sunset was so spectacular that we put going out to see the lights on hold while we sat on his balcony enjoying a glass of red wine while soaking up the glorious sunset. This was particularly lucky because a storm is supposed to be on its way so I was expecting it to be raining while looking at the lights, not basking in the warm glow of a sunset. 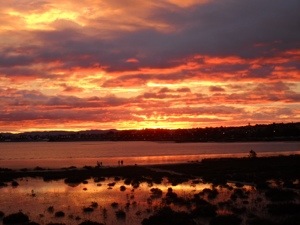 Eventually we made it out to see the Xmas lights on Franklin Road. There was a big queue of cars forming near Fanshaw St so I parked by the skateboard park instead of joining the queue. This turned out to be a very wise move, coz it forced us to walk past the Telecom Xmas Tree which I hadn’t planned on doing. BUT that turned out to be the highlight of the night, it was truly spectacular. I’ve driven past it before but never actually stopped to look at it and certainly never realised you could lie down underneath it looking up at the lights which was AWESOME.

Franklin Rd was great, I’m so glad my mate wanted to go see it, coz I’d already been but it was too late when I went and many homes had their lights turned off. This time the crowds were huge and all the lights were on, music was playing, choirs were singing, a girl was playing a harp and it truly was magical. After that we went back to my mate’s place where I could watch the city lights while sipping on mulled wine and eating Xmas mince pies. 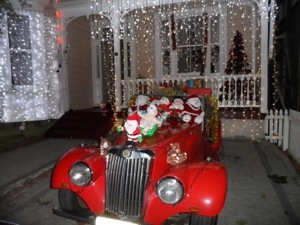