Today we drove to Los Angeles, with only one stop for coffee & gas, it took about 5 hours and was hilarious.

Amy thought it would be nice to pack some food so we could have a picnic on the way, but the one and only picnic stop place was closed for repairs. So while we were stopped in a big traffic jam not moving at all we decided to have the picnic in the car.

This was a great idea till Amy realised the reason for the hold up was an immigration check point where we cross the border from Nevada into California and must not bring any food with us. In a frantic but hysterical panic we tried to eat as much food as we could. Then Amy remembered it was only fruit we couldn’t bring with us and we got waved through anyway – guess we didn’t look like fruit smugglers or maybe it was the fact that I could not stop laughing.

Dinner was in one of Barb’s favourite places called The Cliffs in Laguna Beach, not too far from her place and had a stunning view out over the Pacific Ocean where we got to eat dinner while sipping Margaritas and watching the sun set in spectacular colourful glory. It was perfect. 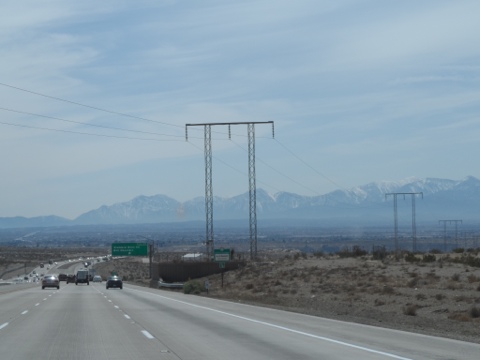