This morning Barb dropped me off at the Disneyland Hotel where I had breakfast before heading to Downtown Disney, a world away from Downtown LA.

Downtown Disney is a mall of shops next to Disneyland. My plan was to spend a couple of hours there shopping for a Mickey Mouse watch, while Barb went to work. As I have been to Disneyland twice before (in Tokyo) I had no intention of going again, especially as I would have to do it on my own.

But how could I come that close to Disneyland and not go in! I couldn’t – and it only took about 15 minutes of watching the happy masses go into the park till I couldn’t resist the urge any longer and I queued up to buy a ticket and go in to the Magical Kingdom.

First ride: Star Tours, a 3D motion movie based on Star Wars and it was just like being in the movie… AWESOME!!!

Next stop a futuristic house designed by Microsoft showing off all their latest very cool and clever technology for your home, then a ride on the Monorail, lunch and a train ride, Jungle Cruise, Tarzan’s Tree House, Indiana Jones, Pirates of the Caribbean, Splash Mountain (where I got absolutely soaking wet), Mr Toad’s wild adventure, Finding Nemo submarines and finally Buzz Lightyear – Astro Blasters. This was a totally different experience from the ones I had in Japan and one of the benefits of being on my own was on some of the rides I could jump straight to the head of the hour long queues as a “single rider”.

While having lunch I observed an amusing thing making the place totally adorable – the kids all have autograph books and they queue up to have a picture taken with each Disney character and get an autograph. You really have to admire the people inside those costumes and their ability to sign an autograph beautifully with those great big padded hands.

I had an awesome day, made even more awesome by the fact that I had no intention of going to Disneyland, but so glad I did. Oh and I bought a Mickey Mouse watch. 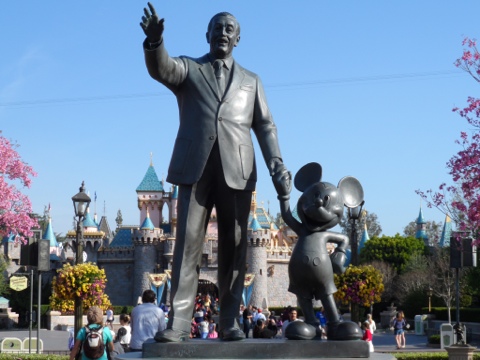